This is a demo of art assets made for the Godot game engine.

Made as a submission for Godot Wild Jam 42.

This project was a solo effort, I worked on everything apart from a few textures that I sourced from various asset packs found on itch.io. I wasn't able to make a full working video game experience, but I can present an art asset demo prototype of the character model and an example environment, with a working camera system and a bit of interaction. I hope you have fun checking it out!

Textures used from these asset packs (many thanks!):
- https://elbolilloduro.itch.io/paquete-de-modelos-low-poly-estilo-psx-2
- https://chilly-durango.itch.io/medieval-building-parts

Troubleshooting:
If for some reason you clicked away when the game started up and suddenly can't control the character anymore, just refresh the web page.

I like it. The Character digging animation is surprisingly good. I haven't found any relics tho. Speaking of which, I made a game named "relic hunter "too. Most likely like a 100 other dudes too ^^

For the focus loss problem, try to add an onclick handler to the canvas, that calls something like:

var mycanvas = document.getElementById('3darea'); // or however your canvas is named 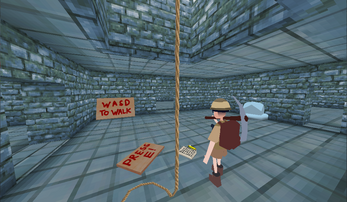